As you can imagine, a lot of incredible things have happened in the course of the last ten days or so… Every day the pieces of nature’s puzzle get put together to form a bigger picture and, as the time passes by, we are able to see and understand more and more about the African bushveld. This is, of course, accompanied by unforgettable sightings which are always a pleasure to witness!

The bush is extremely dry this year, but this has had no ill effect on the high density of thrilling animals surrounding our camp. These conditions have also brought some unusual birds into the area such as Namaqua Doves and Wood Sandpipers, which we have never seen here before! We have also had some great raptor sightings, the most exciting of which were the African Hawk-Eagle and Martial Eagle.

The game viewing is also at an all-time high – we have been visited in camp by Giraffe, Elephants, Buffalo and elusive Spotted Hyaenas this past week alone!

There is truly never a dull moment at Nkombe camp, as we are often interrupted by the chattering alarm calls of Tree Squirrels, the barking of Bushbuck and the nervous distress calls of the Vervet monkey whilst going about our daily activities.

The walking has been absolutely amazing as we have been studying different tracks and signs from small birds to impressive lion tracks. Bird watching is also at its best when on foot, as we often find ourselves only fifty metres from camp with so much to look at!

We had a couple of exciting encounters on foot as well. It is a whole new experience to view animals on their level in their environment as opposed to from the game-viewer. We had fantastic encounters with a couple of Buffalo bulls as we watched them from a distance scratching themselves on trees and continuing with their natural behaviour. We also had an exciting Elephant encounter as we watched a mighty male feeding on nearby vegetation after which we followed fresh lion tracks!

We added an all-new, elegant creature to our ‘exsighting’ list as we found a beautiful Cheetah lying in the shade in the heat of the day. This was a first for many and still spectacular for the rest, as we don’t often get to see these charming cats.

We were lucky enough to find a fresh impala kill hoisted up in a tree one morning. The Leopard responsible for this was nowhere to be found.

After scanning the area for a few minutes, we moved on, but decided to revisit the site later that day. On our return that afternoon, we suddenly heard the thumping sounds of massive Hyaena paws crashing through the bush, literally scraping past our vehicle. We decided to stay put at the site of the kill and just observe these misunderstood creatures with the hope that the Leopard would come back to her trophy…

After about half an hour of waiting, we were just about to move on when Gus spotted her hiding on top of a termite mound not too far away from where the vehicle was parked moments ago. She shot up the enormous Marula and continued feeding on her meal, with Hyaenas’ mouths watering below as they waited for scraps to drop. The carcass started to slip due to her feeding and ,despite all her manoeuvring around the tree, she could not keep the kill from falling. As soon as the carcass hit the ground, she knew it was over and that the Hyaenas outnumbered her.

We then spent the rest of the time observing these creatures’ powerful jaws crushing through bones and hooves until there was almost nothing left but the horns of a once living impala ram. One of the most amazing sightings ever, just proving that patience is everything!

The Elephant sightings that we have been experiencing are personally at the top of my list! We have seen every form and size of Elephant from the cutest baby trying to manoeuvre its clumsy trunk to the most striking and impressive bulls. The students sitting right at the front (on the tracker seat) have had a few unforgettable moments as a few of the Elephants approached the vehicle curiously from the front. These memories will stay with all of us forever…

A curious elephant decides to investigate our vehicle

The coalition of male lions

As if all of the above is not enough, we had an intimate sighting of two new male Lions in the area.

I must say, they were more energetic than our previous coalition, in that one managed to stand up and re-position himself only a metre or so away and then returned to being its lazy, lethargic self!

This was still an absolutely incredible sighting, as we were alone with the respectable cats and had the privilege of watching and inspecting them for half an hour or more. It was remarkable!

It has been an incredible journey so far to see these great students grow and learn every day. I personally (Chanyn) can’t wait to see what amazing field guides they will become…

To another day in Africa – cheers! 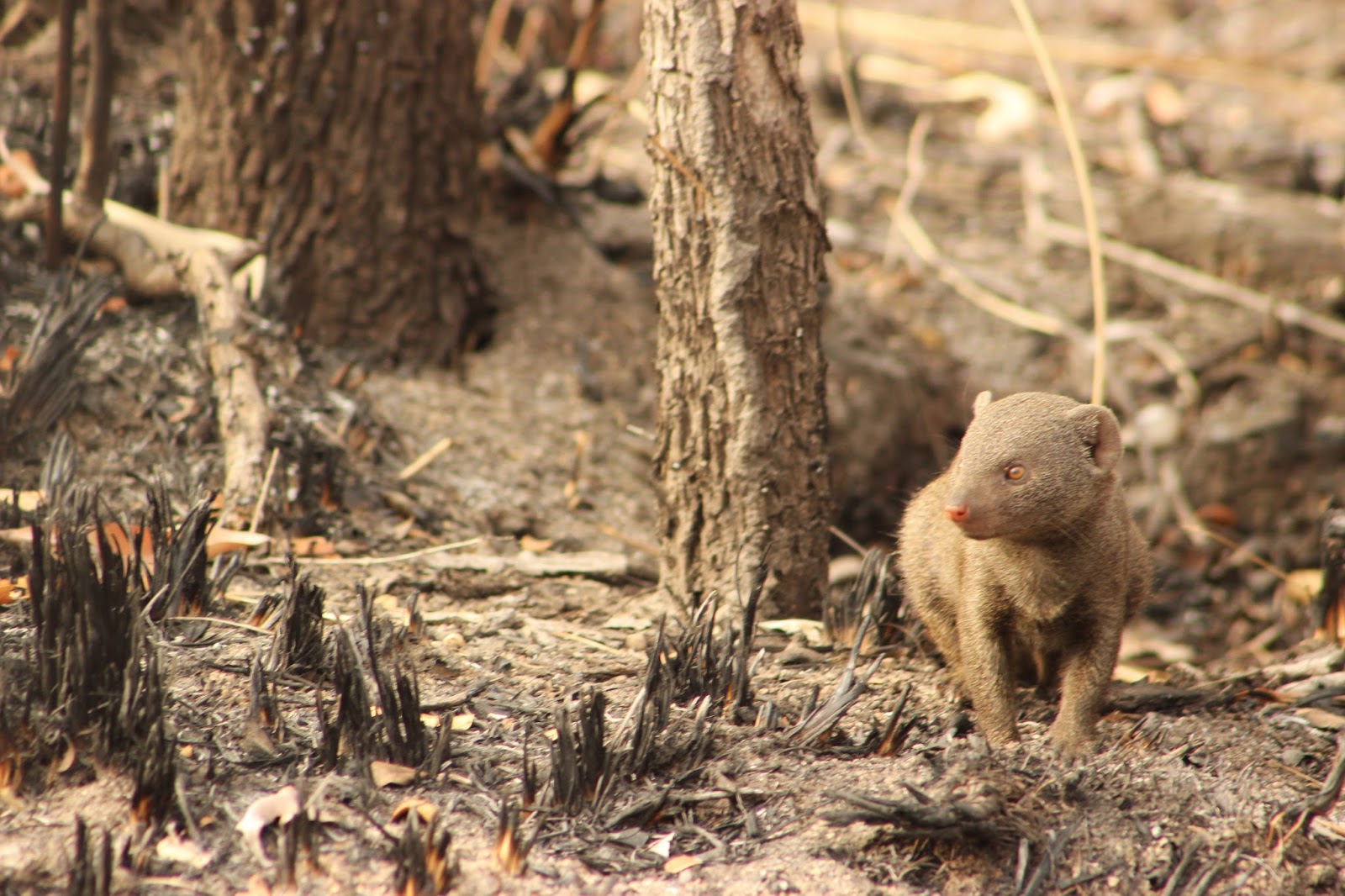 A rare sighting of a juvenile Southern Ground Hornbill 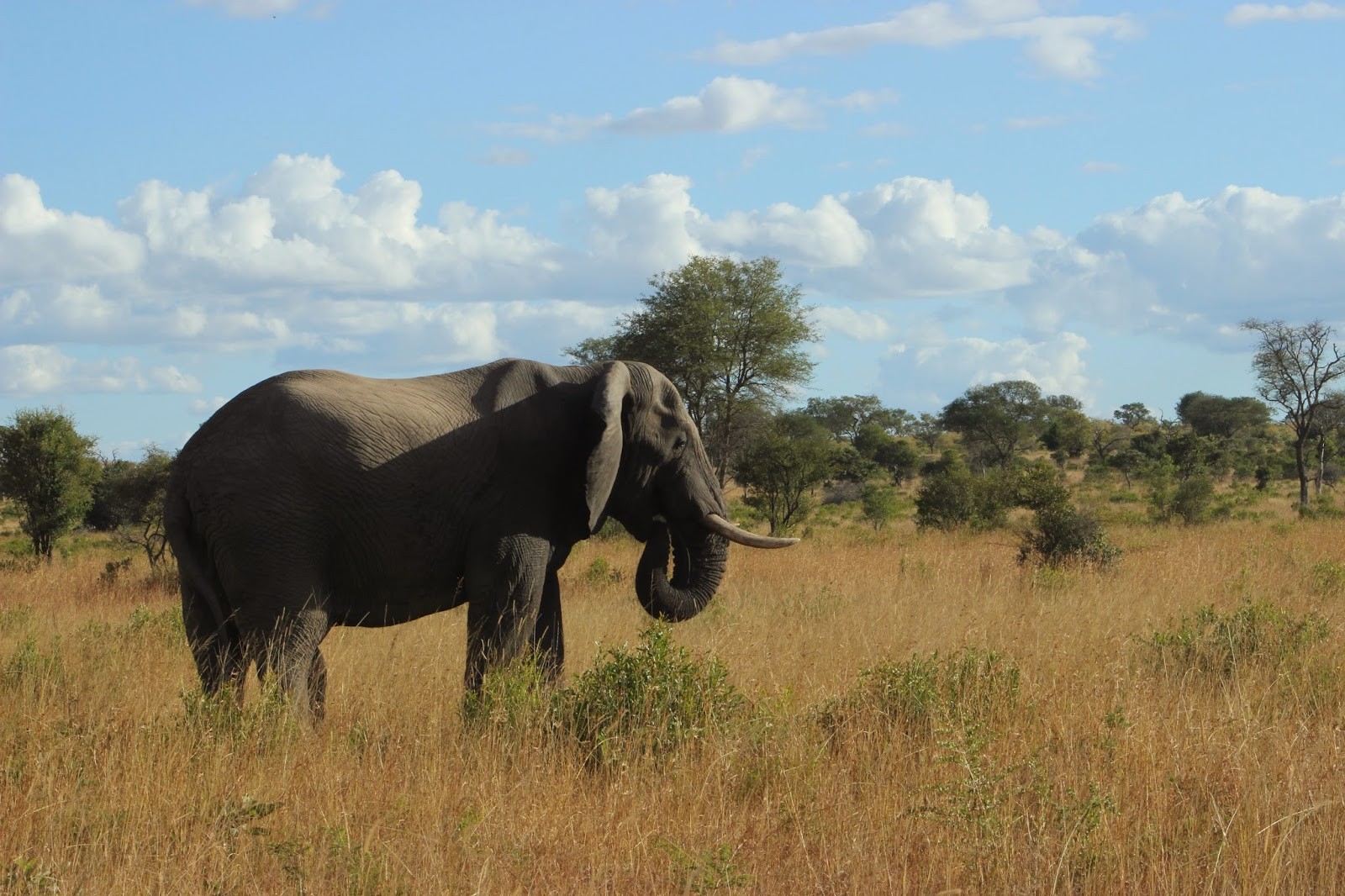 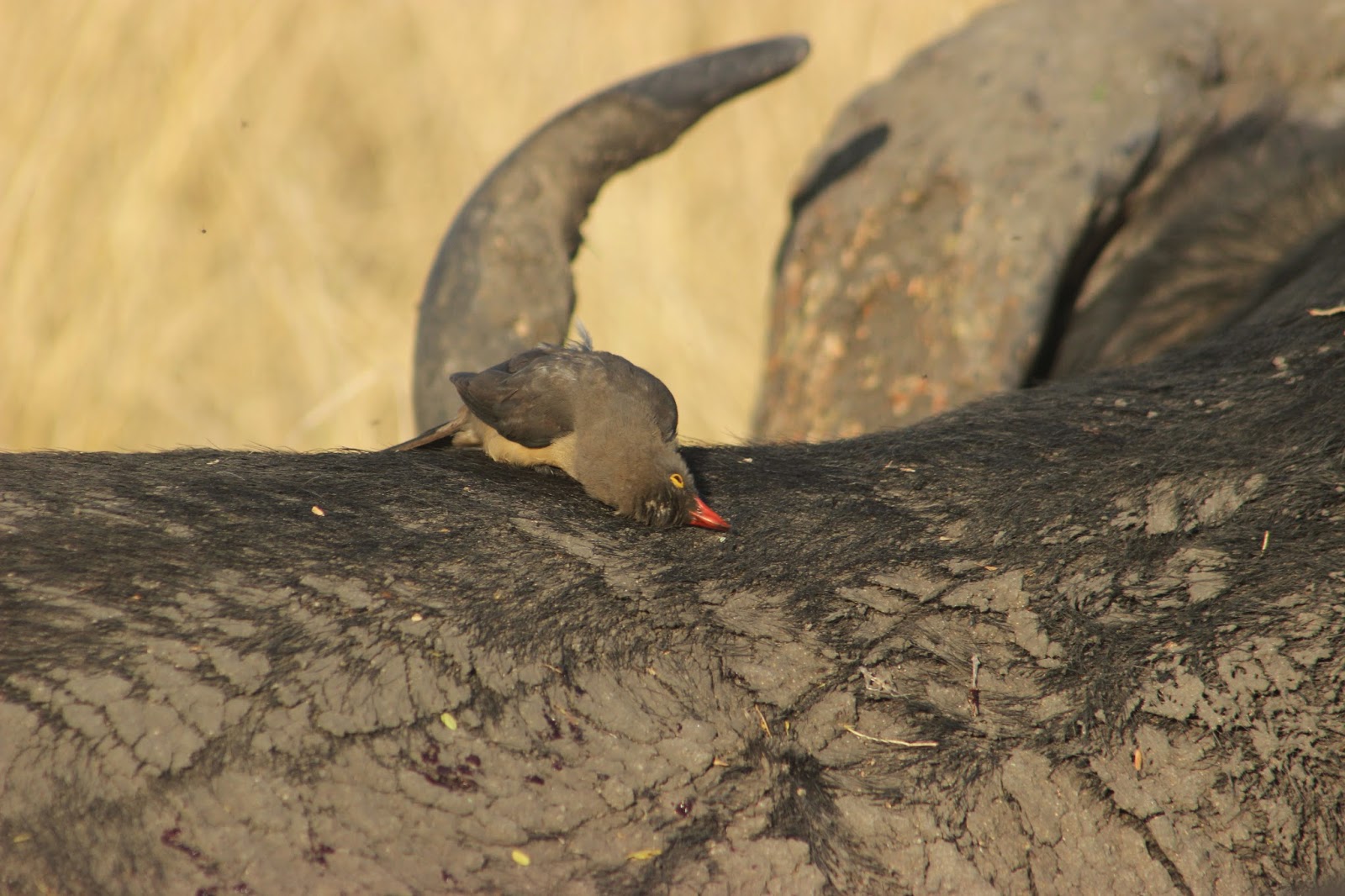 A Red-billed Oxpecker in its element, scissoring its way through the hair on a Buffalo’s back 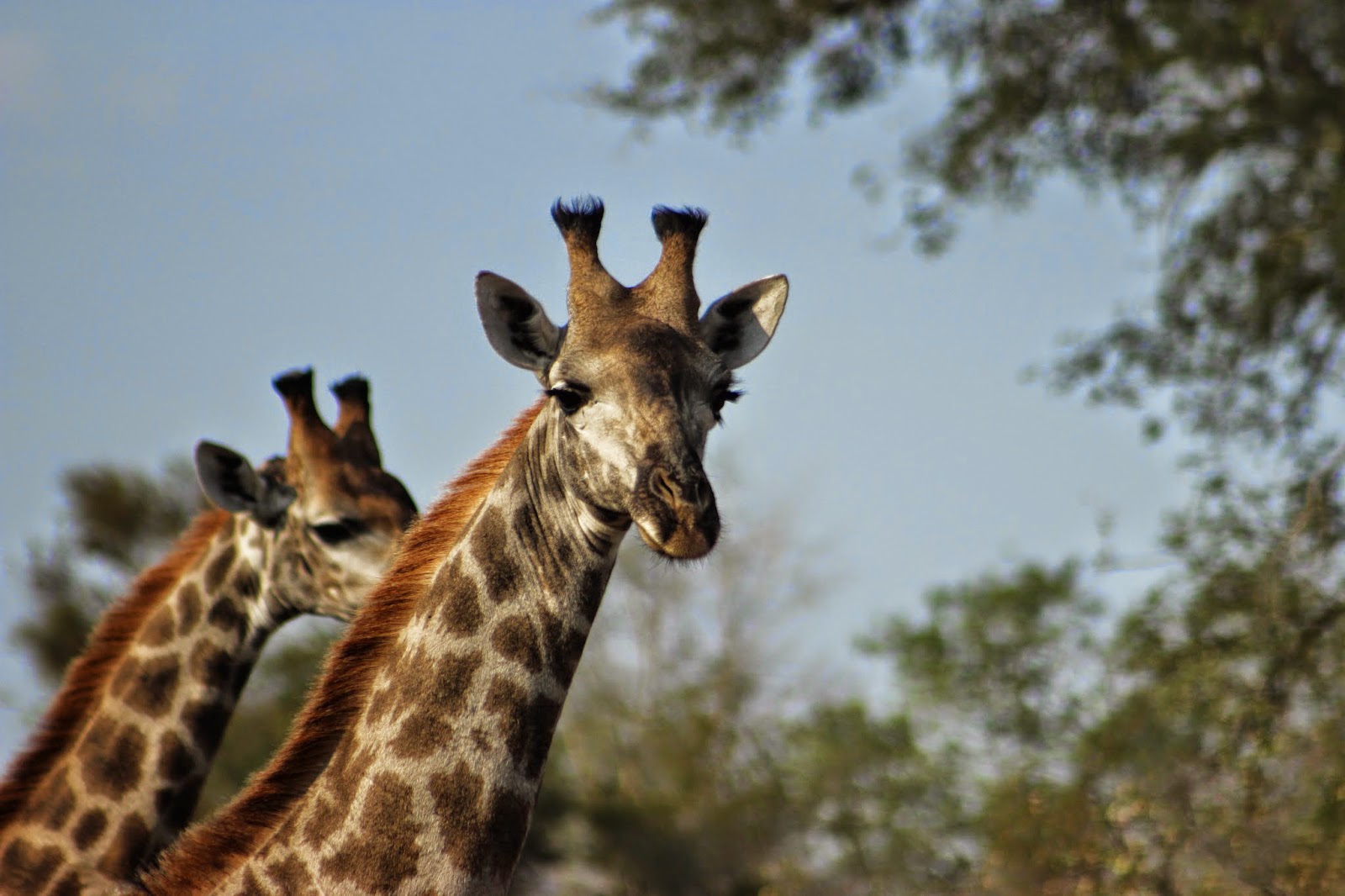 The curiosity of a Giraffe 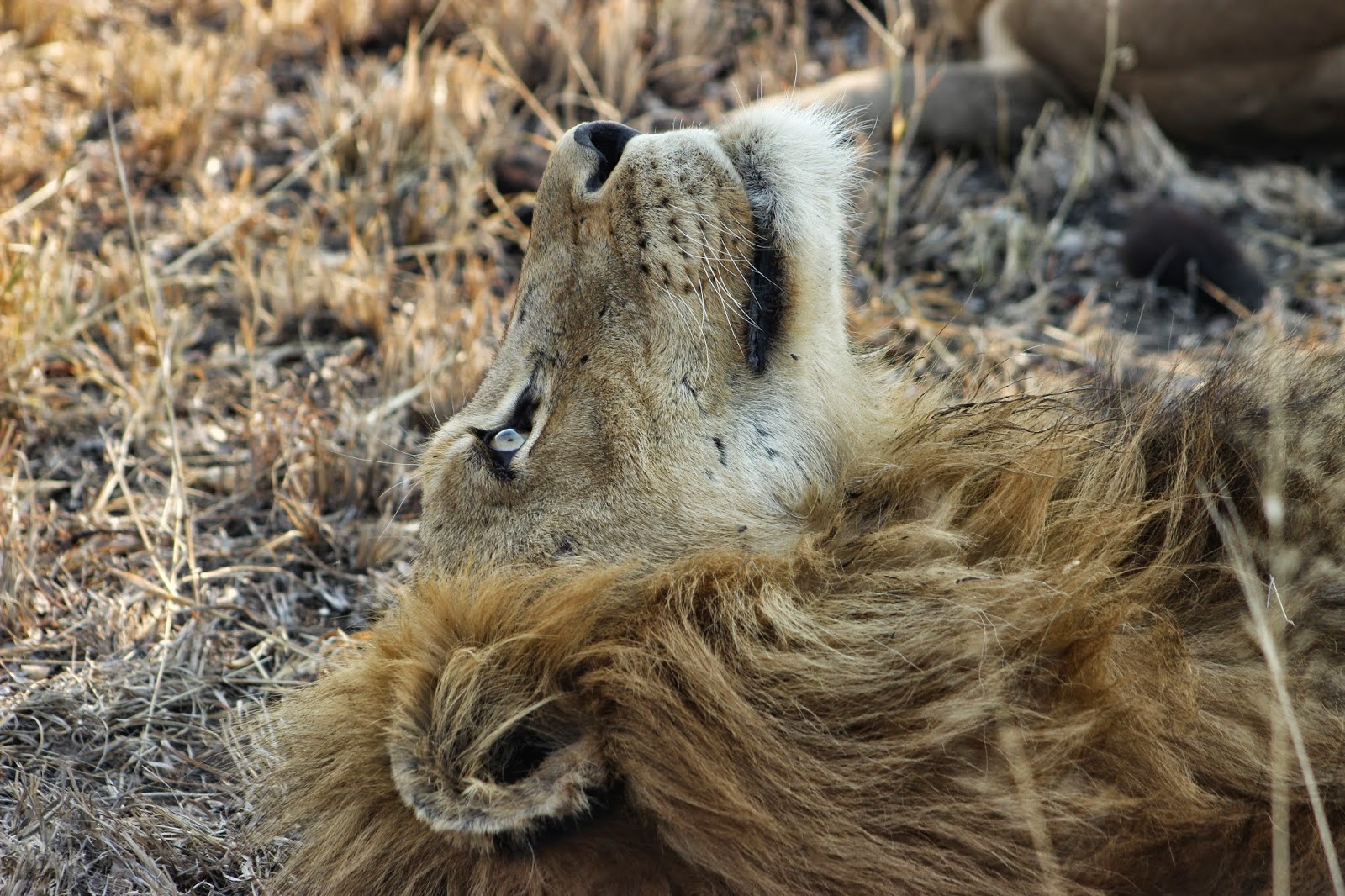 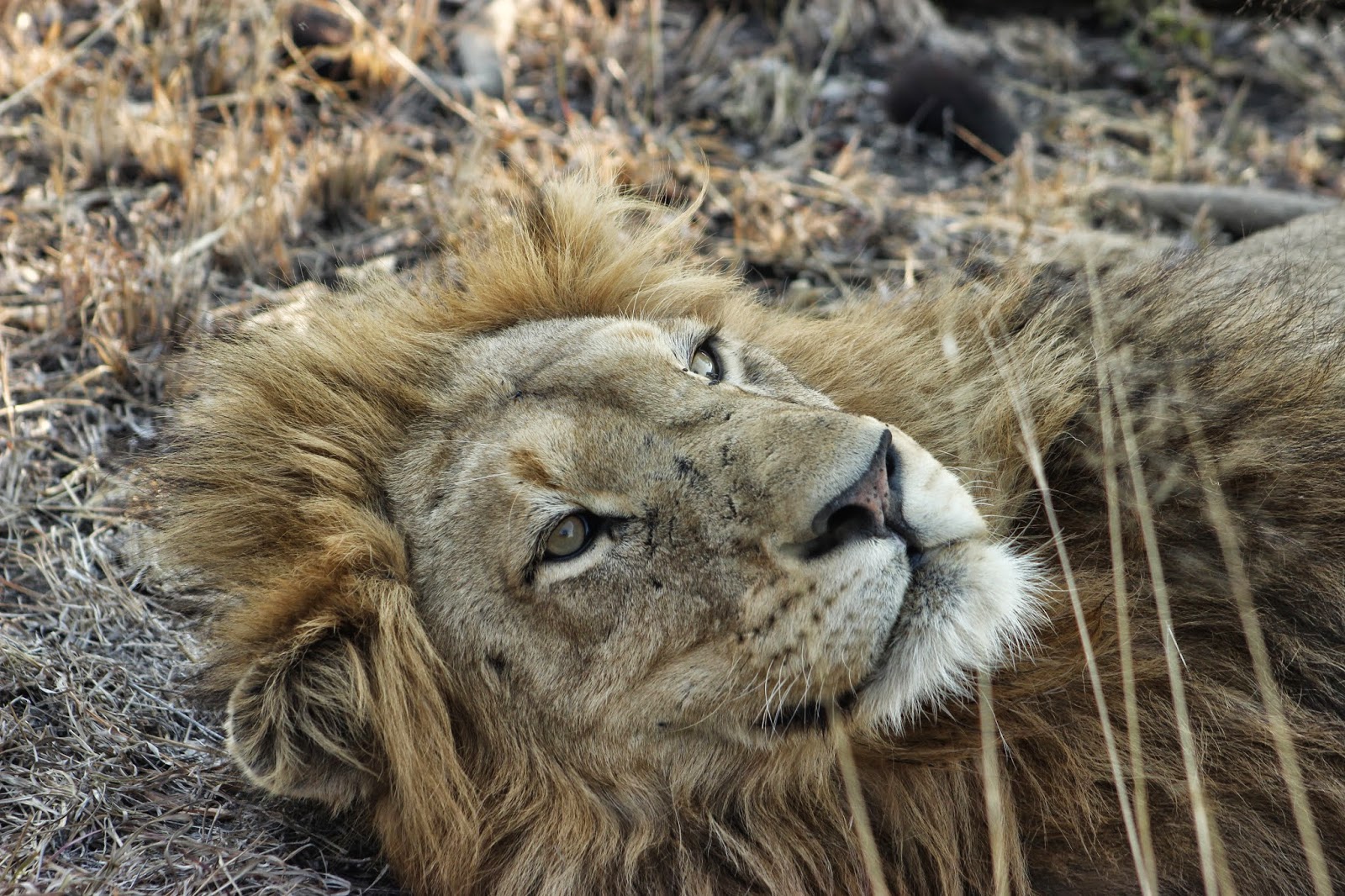 The king of the jungle!